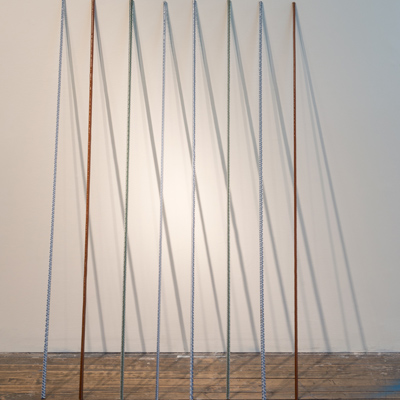 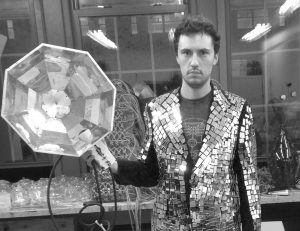 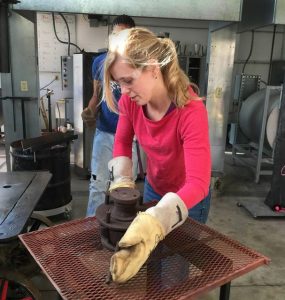 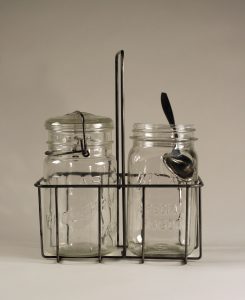 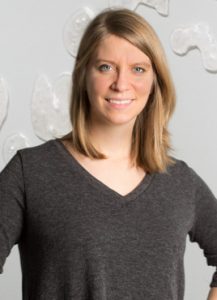 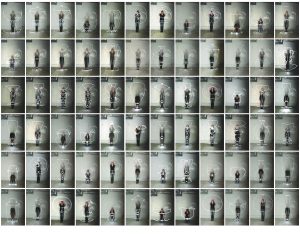 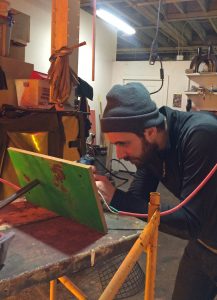 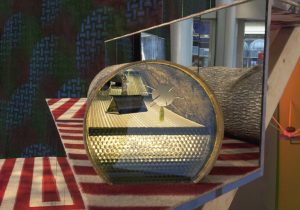 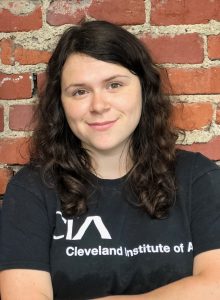 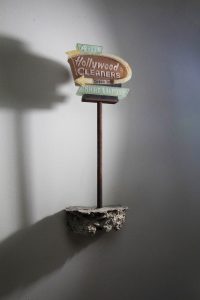 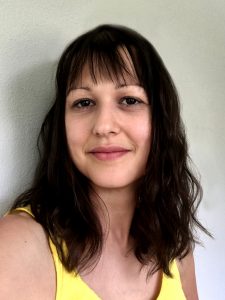 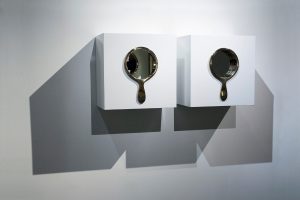 Joanna Manousis, Real / Artifice, 2017, cast bronze, true mirror, wood, paint, 15 x 32 x 15. Courtesy of the artist. “Bronze vanity mirror frames act as peepholes to two mirror boxes. The box to the right reveals the inverted reflection we see of ourselves daily, while the box to the left presents our ‘true’ reflection, shifting our perception of the self.” 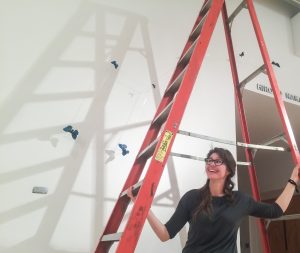 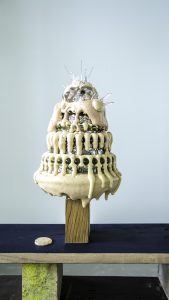 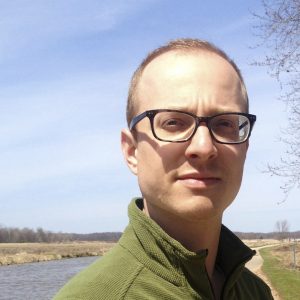 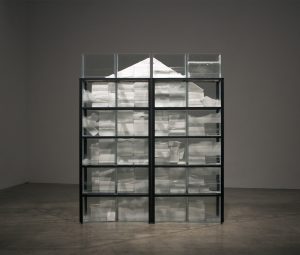 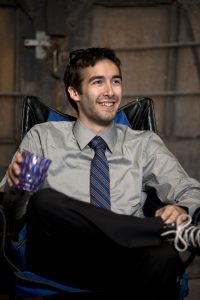 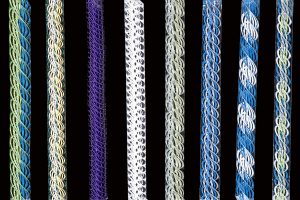 Dual opening receptions Friday, September 21 at 5:30 – 8:00 p.m. with Two of Wands
The Artists and Curator Talk: Selected Artists and Zac Weinberg at 6:15 p.m. in the Euclid Avenue Gallery
The Artists Talk: Adam Milner and Allison Smith at 7 p.m. in the Main Gallery
Campus-wide evening of openings with the Artists Archives of the Western Reserve’s Recast, second ceramic invitational, and open studio for Davis Sculpture Gallery

Glass is a shape-shifting material, often moving between opposites: fluid/solid, delicate/structural, revealing/obscuring, everyday utility/ornamental decadence, overlooked craft/celebrated artistic medium. Glass is a material capable of shifting our perceptions. It is a material to look through, to look at, and to look back at ourselves.

In 1962 the Midwest became the nexus of a movement that radically changed how artists worked with glass. Two experimental glassblowing workshops were held at the Toledo Museum of Art, with an ambition of making this material accessible to the studio artist without affiliation to industry. What emerged from these workshops has now permeated university programs, craft schools, public and private studios across the world. Since this initial spark, the Midwest has continued to be a site of experimentation for glassmaking.

This exhibition highlights emerging artists from a generation who have internalized the developments and technologies that have advanced this material over the past 56 years. Glassmaking techniques, once elusive trade secrets, are now taught at schools and widely distributed across the internet, vastly broadening the working options of today’s practitioners. They embrace the sculptural movements of the preceding decades that redefined making and objecthood, utilizing glass for the many transformative qualities and associations that it encompasses. These artists feel free to operate simultaneously or sequentially in the multiplicity of aspects inherent within glass.

Zac Weinberg earned his BFA from New York State College of Ceramics at Alfred University (2009) and his MFA from The Ohio State University (2015). Currently, he is working as a Glass and Sculpture Technician at Bowling Green State University. Weinberg’s specialty is glass, but he works across mediums – appropriating archetypical forms, and upturning expectations of archival forms and commodities. His most recent exhibition was Zac Weinberg: The Lampshade Variations, a Sculpture Center W2S 2018 exhibition.

Jennifer Halvorson is an Artist and Assistant Professor of Glass at Ball State University.  She earned dual BFA degrees in Glass and Metal at the University of Illinois and a MFA in Glass from the Rochester Institute of Technology.  Jennifer also studied at the Australian National University as an exchange student and at Danmarks Designskola as a Fulbright Scholar. Her mixed media works revolve around the importance of objects that are manipulated or collaged to express a range of emotions and narratives.  Her sculptures have been exhibited internationally throughout the United States and Europe.  Learn more about Jennifer at jenniferhalvorson.com.

Kim Harty is an artist, writer, and educator. Her work investigates the connection between craft and technology through sculpture, installation, video, and performance. She is heavily informed by her training as a glass blower, and draws on her personal history as a craftsperson to explore how kinetic knowledge can be tracked, embodied, and performed. Her work has been shown in galleries and museums across internationally including the Toledo Museum of Art, the Design museum Gent, the Chrysler Museum of Art, and the Corning Museum of Glass. She is currently an assistant professor of glass at the College for Creative Studies in Detroit, Michigan.

Nate Ricciuto merges sculpture, glass, image and performative objects in envisioning perception and representation as existing in the odd space between the technical and the intuitive. His work has recently been exhibited at Weston Art Gallery (Cincinnati, OH), The Museum of American Glass (Millville, NJ), Islip Art Museum (Islip, NY), S12 Galleri (Bergen, Norway), ICEBOX Project Space (Philadelphia, PA), and Pilot+Projects (Philadelphia, PA) among others. Nate is currently a Visiting Lecturer at The Ohio State University and an Instructor at Columbus College of Art & Design in Columbus, OH. He earned an MFA from Tyler School of Art, and holds a BFA from The Ohio State University. Nate has been an Emerging Artist in Residence at Pilchuck Glass School and a Creative Glass Center of America Fellow, and in 2017 received an Individual Excellence Award from the Ohio Arts Council.

Heather Clancy is an artist who works primarily in cast glass to create sculptures referencing the changing built environment. Through the reference of aged locations she works to create a platform for discussion of personal memory and passing time. The subject of her work stems from observing the urban environment she inhabits as an adult in contrast to her own rural upbringings in Deerfield, Ohio.

She received her BFA from the Cleveland Institute of Art (2018) and now finds herself as a Tech Apprentice at the Pittsburgh Glass Center. Her work has earned her several Scholarships including the Viktor Schreckengost Scholarship, Glass Art Society’s General Scholarship, and the Penland Higher Education Partners Scholarship.

British – American artist, Joanna Manousis lives and works in the United States, creating sculptural objects and installations in glass and mixed media. She has earned numerous awards and internationally recognized nominations for her work, including a Louis Comfort Tiffany Foundation Nomination in 2017, The Margaret M. Mead Award through the Burchfield-Penney Arts Center in 2011, the Hans Godo Frabel Award for ‘Outstanding Achievement in Glass’ in 2010, and a Bombay Sapphire Award nomination for ‘Excellence in Glass’ in 2008. Manousis has created her work within major public museums and studio residency programs, including The Toledo Museum of Art, OH, The Museum of Art and Design, NY, The Corning Museum of Glass, NY, and Cité Internationale des Arts, France. Her work has been exhibited internationally at institutions and art fairs including The Glasmuseet Ebeltoft, Denmark, The British Glass Biennale, UK, Salon Art + Design, NY and FOG Art + Design, San Franscisco. Holding a Masters of Fine Arts in Sculpture from Alfred University, New York, and a First Class Honors Bachelor Degree in Fine Art from The University of Wolverhampton, England, Manousis has worked, studied and taught in Japan, the United Kingdom, the United States, and Australia.

Alli Hoag‘s artistic practice is concerned with themes of magic. Seeing magic as the desire to connect with the world outside of our perceptual and cognitive abilities, she attempts to create moments where one can believe that distance is overcome. Alli works across mediums of glass, installation, video, performance and digital technology to investigate this uniquely human desire, and to reveal the simultaneous lightness and heaviness that is created when the imagined or invisible is labored into the physical realm. She has exhibited both internationally and nationally including UrbanGlass NY, and S12 Galleri in Bergen Norway. In her glass performance collaboration with performance artist Tinna Thorsteindottir, Bylta, she has performed at Corning Museum of Glass, Urbanglass NY, and the Chrysler Museum. She currently serves as Head of the Glass Program at Bowling Green State University.

Sean Merchant is an artist and educator currently based in Brunswick, Ohio. Sean was raised in Northwest Illinois and received his Bachelor of Fine Arts from Illinois State University in 2005. Sean completed his Master of Fine Arts from Ohio State University in 2017. From 2007 to 2014, Merchant was the art director for the architectural art glass firm Jacksonville Art Glass, in Jacksonville, IL. Sean’s work has been featured in Sculpture Magazine (Oct ’17), as well as American Glass Now: 2017 (American Glass Guild). Merchant was included in the 2017 International Sculpture Center’s Outstanding Achievement in Student Sculpture awardee exhibition, and in 2016 he participated in Bullseye Glass’s biennial exhibition and catalog “Emerge/Evolve” 2016. His work has exhibited recently at the Collective Artist Network (CAN) Triennial in Cleveland, Ohio; Belger Crane Yard Studios, Kansas City, MO; Logan Center for the Arts, Chicago, IL; and the National Cathedral, Washington D.C.

Mike Stevens started blowing glass in Indianapolis, Indiana, at a small community art center within his neighborhood. After a few years of classes he applied to and attended Bowling Green State University and graduated with a BFA in 2012 with a focus in glass and sculpture. After school he moved up to Toledo, Ohio, to open Gathered Glass Studio with Adam Goldberg and Eli Lipman. They have been successful with integrating themselves into the community and have created public works for organizations such as The Toledo Zoo and the local hospital system of Promedica. As a studio they hope to continue to make public art and private installations for many years to come.