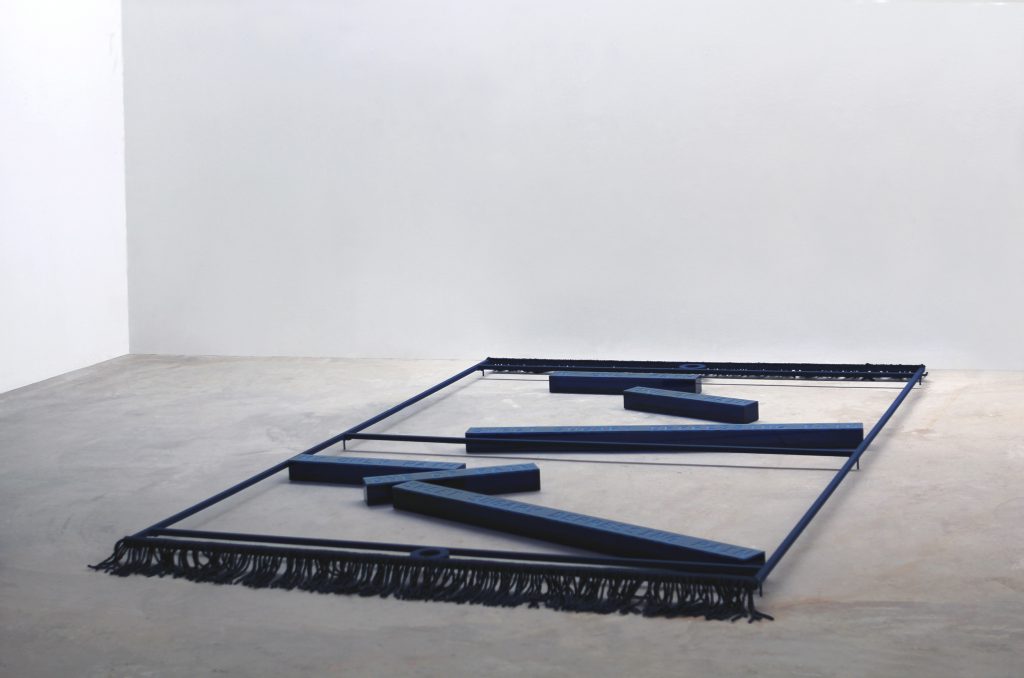 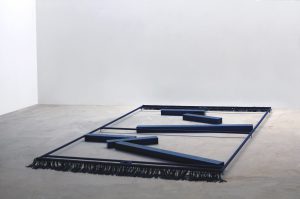 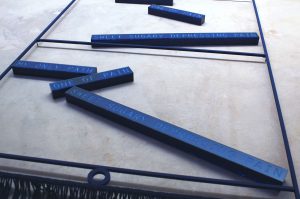 Paul O’Keeffe, “My Only Path” (detail) 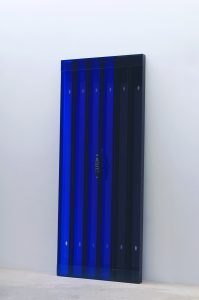 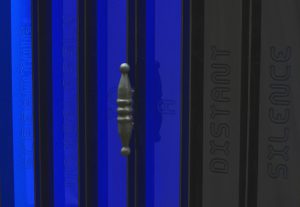 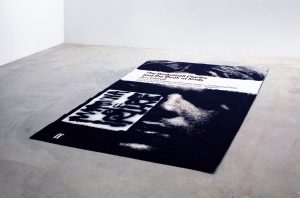 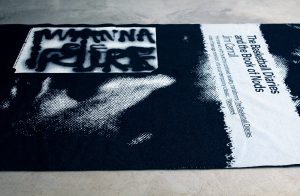 Paul O’Keeffe produces the most carefully thought out and exactingly made art — enigmatic in appearance and rewarding upon careful consideration. The work is highly cerebral, planned, concise, and extremely sophisticated in concept and visual actualization. His sculpture is meticulously produced; his proportions are beautifully conceived; he plays continuously with open and closed spaces and forms, and positive and negative space. His larger metal pieces are open and airy, contrasting long metal expanses with dense, seemingly unknowable, repeating shapes and even textiles, drawing the viewer around to examine them from every vantage point, each of which is effective. The smaller metal pieces are very tightly contained with geometric asymmetries that also require different view points.

O’Keeffe’s new body of work for Screaming Voicelessly to a Distant Silence is a commemoration of the short life and meditation upon the sudden death of one of his children, Christian. For each of the five pieces, Paul drew from Christian’s artistic output as a poet.

Paul is very attuned to social disruptions and deeply attached to his family, and uses his sculpture to probe and express these emotions in such a subtle manner that he does not impose them upon the viewer. His representation of the quotidian personal object falls within the interests of many contemporary sculptors wishing to counter the vision of sculptor as heroic creator and sculpture as monumental, heroic object. He is not interested in the found object, but rather in his family objects and his personal memories. These personal items and matters are so abstracted and altered to create a highly formal structure that, unless one knows the back narrative, each piece stands on its own aesthetic merits. One might even argue that his work is somewhat cold in its formality, only to have this counter balanced by his always beautiful surface treatments and colors, often brightly hued, Dayglo flashe paints, and by the complex emotions that are expressed when the work is fully comprehended.

Paul is Professor Emeritus of sculpture at Kent State University, and for the first time since his university days, is able to concentrate all his energies upon his work. He is the recipient of a 2017 Guggenheim Fellowship and a 2017 Ohio Arts Council Individual Artist Excellence Award. Paul is extremely grateful to the John Simon Guggenheim Memorial Foundation and the Ohio Arts Council for their direct support of his work this year.

Artist’s Statement: Screaming Voicelessly to a Distant Silence
Much of my recent work memorializes my son, Christian, a college student and aspiring poet, who committed suicide five years ago. After walking a path for two miles along a railroad track beside the Cuyahoga River, close to midnight, he knelt by the track and waited for an oncoming freight train. This exhibition at The Sculpture Center consists of five discrete pieces grouped together that incorporate texts he wrote during his final year. My aim is to memorialize but also materialize the sense of space, time and physicality suggested by some of his writing. The installation is designed to encourage movement by viewers in order to better grasp various textual aspects, while slowing down their perception and absorption of the grouped components.

I’ve chosen a devastatingly beautiful poem that speaks of the exhilaration he imagined his death would grant him, along with other texts that show him at a low ebb as he struggled with constant pain from Bell’s Palsy. The centerpiece of the installation is a low, five inch wide steel channel, painted various shades of blue, that bisects the entire space. Laser cut into the sides is the following poem:

In close proximity, a transparent, colored, rectangular object suggestive perhaps of a door or gate, leans against a wall. Inscribed into the surface are the words: screaming voicelessly to a distant silence. Another piece, a large, low, painted linear steel structure, with bullion fringe trim at both ends, contains six transparent blue rectangles twice inscribed with the phrase:

My only path,
One of pain,
Sweet sugary depressing pain

I see these excerpts as an epitaph for the last year of his life and they give me insight into aspects of his life I did not grasp at the time.

A large Jacquard weaving that incorporates an image of a paperback cover of a Jim Carroll book overlaid with a spray text drawing by my late son, lies on the floor. His drawing quotes the author, who was my son’s favorite writer. The sprayed words state: I wanna be pure.  A cast bronze replica of a spiral bound binder of Christian’s poems lies on top. Viewers are welcome to pause, sit or lie on the weaving and read an actual copy of this binder should they wish.

Quiet Gutter Birthday Curb was the title my son gave to this xeroxed spiral bound collection of his poems and his title is the focus of another work in the exhibition. These words are laid out in a scrabble like arrangement of individual letters on a grey felt rug, each having been individually inscribed and cast into rounded, 3 1/2 inch wide, dark grey, hydrostone discs. Another black patined bronze cast of this book is laid out on the lower right corner of the rug. Both casts in the exhibition may be seen as markers for a life cut short.

Paul O’Keeffe Bio
Born in Dublin, Ireland, O’Keeffe attended St. Martin’s School of Art, London and the National College of Art and Design Dublin.He subsequently studied at UCLA through a Fulbright Travel Scholarship, where he received an MFA. A professor emeritus at Kent State University, O’Keeffe currently lives and works in Cleveland, Ohio. O’Keeffe has had solo and group exhibitions in New York, Los Angeles, Paris and Dublin, including at White Columns, NY; Temple Bar Gallery and Studios, Dublin; Cleveland Museum of Art, OH; Akron Art Museum, OH, Dorsky Projects, NY; among others. His work is in public and private collections including The Arts Council of Ireland; Bayer USA, Pittsburgh; Progressive Insurance, Cleveland; Kaiser Permanante, Cleveland; and the Cleveland Public Library. He is the recipient of a number of awards including a Ford Foundation grant, twelve Individual Artist Excellence Awards from the Ohio Arts Council, an Arts Midwest/National Endowment for the Arts Award, awards from the Arts Council of Ireland, and a 2017 Guggenheim Fellowship.  Visit Paul O’Keeffe’s website.