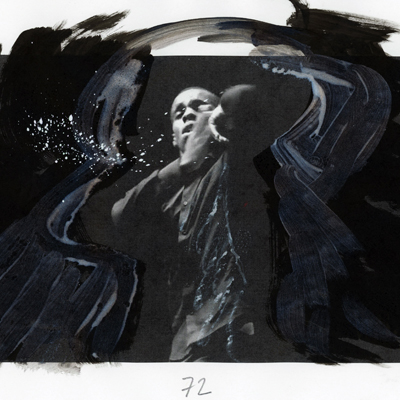 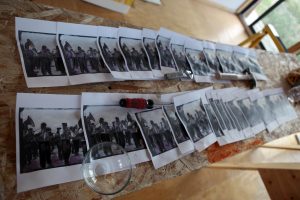 Rian Brown in her studio. 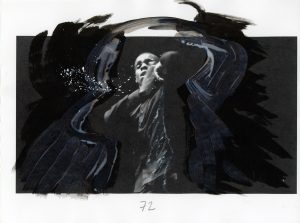 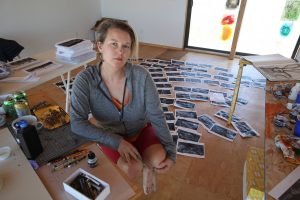 Rian Brown-Orso in her studio. 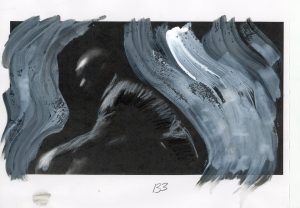 Artist Statement
Palimpsest:
something reused or altered but still bearing visible traces of its earlier form

The installation reveals a process that I developed to make animated moving images that involves drawing/painting/retracing onto films.

The source material is an archival film clip or filmed sequence that I have shot. I print out each individual “frame” of the film onto a piece of 8 x 11” paper and hand paint each “micro-moment of time.”  There are twenty-four frames that make up one second of time. Then these painted images are re-photographed into what is a fully combined moving image sequence. I call this process DIG-TAC, which stands for the intersection between digital (video) and tactile (painting/drawing). Formally, it is a cycle from film to painting, back to film, resulting in an emotional, psychologically intense viewing experience – a palimpsest of sorts in which the images embody layers of time being re-traced, re-membered, re-imagined.

Each of the cascading sequences that come from the ceiling to the floor in the exhibition are made of twenty-four individual “frames” which represents one second of time.

The images you see in the exhibition are animated sequences from the film, The Foreigner’s Home (2017) a full-length documentary film that I co-directed and produced with Geoff Pingree that explores Toni Morrison’s artistic and intellectual vision. The animated DIG-TAC images are of Nina Simone, Martin Luther King, Lil’ Buck, a New Orleans second line, D’ de Kabal, Toni Morrison, a Syrian refugee,  The Raft of the Medusa a painting by Theodore Gericault, and a bird in hand sequence based on a parable from Toni Morrison’s Nobel Prize acceptance speech in 1993.

The animations were designed to build a visual world to support the prophetic words and ideas of Toni Morrison in the documentary film I recently made which explores her artistic and intellectual vision through “The Foreigner’s Home” 2006 exhibition at the Louvre in Paris, France. The film presents a series of candid and incisive exchanges about race, identity, “foreignness” and art’s redemptive power. You can learn more about the film and where is screening at www.theforeignershome.com.

My original drawings used for these animations were made during an artist residency at the Montello Foundation in Nevada in 2016.
www.montellofoundation.org

The sound is composed by Isaac Jones.

Artist’s Bio
Rian Brown is an independent filmmaker, visual artist, and Associate Professor of Cinema Studies at Oberlin College. She grew up in Boston, studied visual art at Massachusetts College of Art and received her Masters of Fine Arts in film from the University of California, San Diego. Brown’s work spans a variety of film genres, including experimental, animation, documentary, and video installation. For the past two decades she has written, produced and directed many short films including Into the Scrum, Presence of Water, The Settler and Death of the Moth which have screened internationally at film festivals and museums including the L.A. Hammer Museum of Art, Harvard Film Archive, The Wexner Center for the Arts, Anchorage Museum of Art, MOCA Cleveland, Nashville International Film Festival, Ann Arbor Film Festival, Women in the Director’s Chair and others. Reflecting Brown’s background in painting and cinematography her films employ visually dynamic imagery, hand-painted animation, and experimental techniques. Brown co-directed Blue Desert ~ Towards Antarctica, a multichannel video installation shot during an expedition to Antarctica with National Geographic. Brown was Associate Producer for feature documentary, Raise the Roof, a heroic story about rebuilding a Polish synagogue, which appeared on PBS in 2017 and won Best Documentary in the Seattle Jewish Film Festival and screened in over sixty film festivals worldwide.  In 2009, she co-founded and co-directs the Apollo Outreach Initiative, a media education program that works with urban youth in the Cleveland area. She has received numerous awards including three Ohio Arts Council Individual Excellence awards and was an artist in resident at the Headlands Center for the Arts. In 2015, Brown and her colleague Geoff Pingree were awarded grants from the Andrew W. Mellon Foundation and the Ford Foundation’s Just Films initiative for the production of The Foreigner’s Home, a feature-length documentary on the intellectual and artistic vision of author Toni Morrison.  Her work focuses on women’s issues, social justice and experimenting with new forms of animation and time-based art.