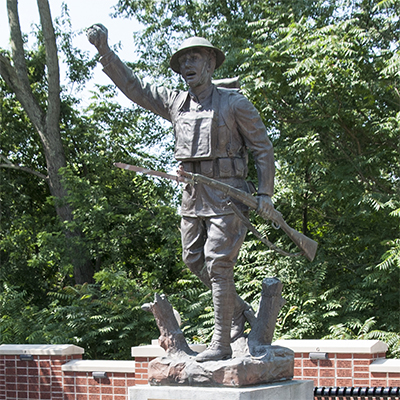 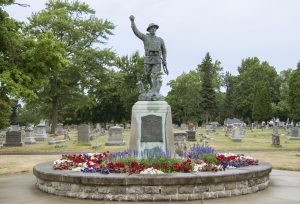 “Spirit of the American Doughboy” by E. M. Viquesney. Photograph by Madison Reep 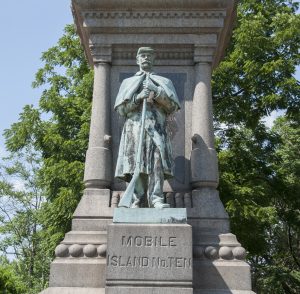 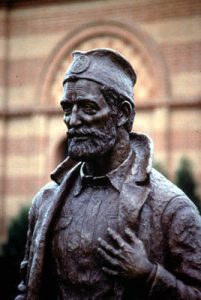 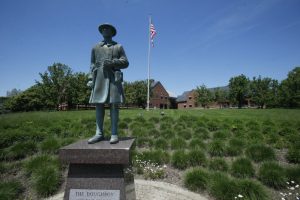 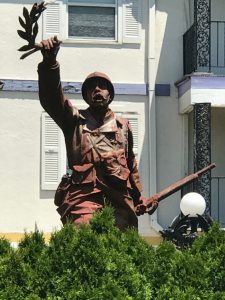 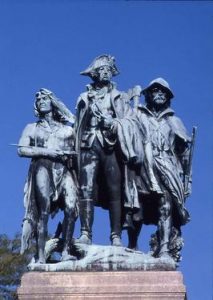 The Sculpture Center is pleased to announce that summer 2018 intern, Madison Reep, has curated a new driving tour for the Ohio Outdoor Sculpture website. Madison is a studio art major at Cleveland State University with a focus in sculpture. She created this tour after learning about E. M. Viquesney’s The Spirit of the American Doughboy which is the most iconic and replicated World War I memorial in the United States. Her focus for this 58 sculpture collection is the sentiment of memorializing the common citizen soldier, rather than celebrating war. Read her full curatorial statement below:

“War-related memorials have been a common phenomenon globally for centuries with some of the earliest forms celebrating the glory of war itself and the powerful individuals who were high up on the hierarchal system. Kings, generals, and war officials were made to be seen as gods of their people and true victors of battle through busts, relief carvings, and larger-than-life figural monuments. Following the horrors of World War I and the subsequent seismic societal changes, a vast paradigm shift for war memorials took place around the world. The focus moved in a democratized fashion not to celebrate war, but rather to commemorate the fallen and injured citizens who participated in them. World War I memorials (especially in the West) often exemplify government involvement in the commemoration of fallen soldiers, but the voice of the communities that commissioned these objects can be heard –or rather seen- in the customized aspects (such as listing the names of the servicemen/women) of their region’s monuments.

This democratization in American war monuments to glorify the common soldier as well as the officers can be periodized between the years of 1865 through the 1890s, directly after the Civil War. The outcome of the war created a civic need to mend the seams of a splitting nation, which often fell onto the hypothetical shoulders of newly erected visual symbols such as statues and obelisks, reminding viewers of the sacrifices fresh on the minds of the American people. The monuments were inteded functioned as a means to create an understanding between the two warring sides by turning attention to something greater than victory or failure –the brother, fathers, and friends lost or wounded in the gruesome conflict. The inward need of the people to move on, but not forget, started a trend within smaller communities to commission monuments honoring the dead and wounded of their hometowns.

At the time, American sculptors were scarce as many had established permanent studios abroad, but a few neoclassically trained artisans remained and were employed to create figurative statues to memorialize the citizen soldier. One of the earliest, and possibly the first, examples of a standardized Union soldier sculpture that would later be a model for mass-produced versions is located in Spring Grove Cemetery in Cincinnati, Ohio. The memorial piece, titled The Sentinel, was modeled by Randolph Rogers in 1864 and cast by the Royal Foundry in Munich in 1865, the final year of the Civil War. While The Sentinel stands out as a slight variant, two companies, The Monumental Bronze Company of Bridgeport, Connecticut, and the W. H. Mullins Company of Salem, Ohio, featured near-exact replicas of this citizen soldier in their 1882 and 1894 (respectively) catalogs, which marketed them as ready-made designs that could be customized as either a Northern or Southern soldier with various types of embellishments.

The question remains, however, Who is this man who has become a national symbol for Civil War memorials? An article in Harper’s New Monthly from June of 1866 includes a detail on the inspiration for the figure. An Englishwoman stated to Rogers that she supposed the man was Stonewall Jackson, a prominent Confederate general, to which Rogers replied that it was, contrarily, the man who had shot him. It should be clarified that later variants did not seemingly hold the same political sentiment that Rogers was trying to provoke and were focused towards a more generic understanding of the man’s identity, representing the likeness of whomever the viewer wanted it to be.

As World War I was coming to a close, the American government began systematically erecting memorials for both empathetic and reputation purposes. The U.S. government wanted to memorialize those who had made personal sacrifice, but one can interpret from the generic, yet grandiose nature of these monuments that the government was working in a dated, pre-war style. Other countries were also erecting expensive sculptures to mourn the tragedies of the Great War, but in contrast to America’s large, robust, architectural memorials that often featured only emblems and insignias for the various branches of the military, countries such as England and Germany were commissioning works by trained artists who largely depicted soldiers complemented by classical decoration.

In reaction to the mildly callous presentation of these government sponsored memorials, communities wanted their own versions. A man from Spencer, Indiana, named Ernest Moore Viquesney, saw an opportunity as the national interest rose for these monuments. In 1920, while working in Americus, Georgia, for Clark’s Monumental Works and Schneider’s Marble Company, he designed the most famous (and replicated) American World War I sculpture memorial, titled The Spirit of the American Doughboy. Since his death in 1946, many replicas have been crafted from molds made from his original sculptures. They have been erected all over the U.S. in pressed copper, stone, and cast zinc, while Ohio has the claim to fame for holding the most Viquesney figures in all of the United States at fourteen sculptures total. Ten Ohio Doughboys are signed originals, one is a signed variant of the typical form, and three are copies made from a mold taken of an original.

Again one asks, Who was this man who fought so gallantly for our country in the Great War? My research led me to an answer that I hadn’t really expected, This man, simply put, was no one. The sculpture’s face is a composite of faces of several veterans whom Viquesney either met in person or had seen in photographs. By this amalgamation Viquesney was capturing “the spirit” of the Doughboy, not just a single likeness. (It is commonly assumed that Viquesney’s friend and business partner, a Georgian man named Walter Rylander, acted as the model for the body of the Doughboy.)

For this reason, I have titled my tour The Face/ The Spirit of War to be an exploration of the unique lives of the participants individually portrayed in sculpture, an investigation of the sculptures that have defined a visual symbol or standard for the remembrance of many individuals in a war, and an observation of the sentiment of communal mourning. My tour intentionally spreads far across all of Ohio. This is not for someone to visit in any kind of order or in a single trip, but is done so that one may find the faces and the spirits of the veterans who fought for their home specifically, whether you’re in Trumbull County, Woodville, or even my hometown, Cleveland. You can gaze upon these sculptural phenomena and remember that SOMEONE, not just anyone, gave you the freedom to do so.”