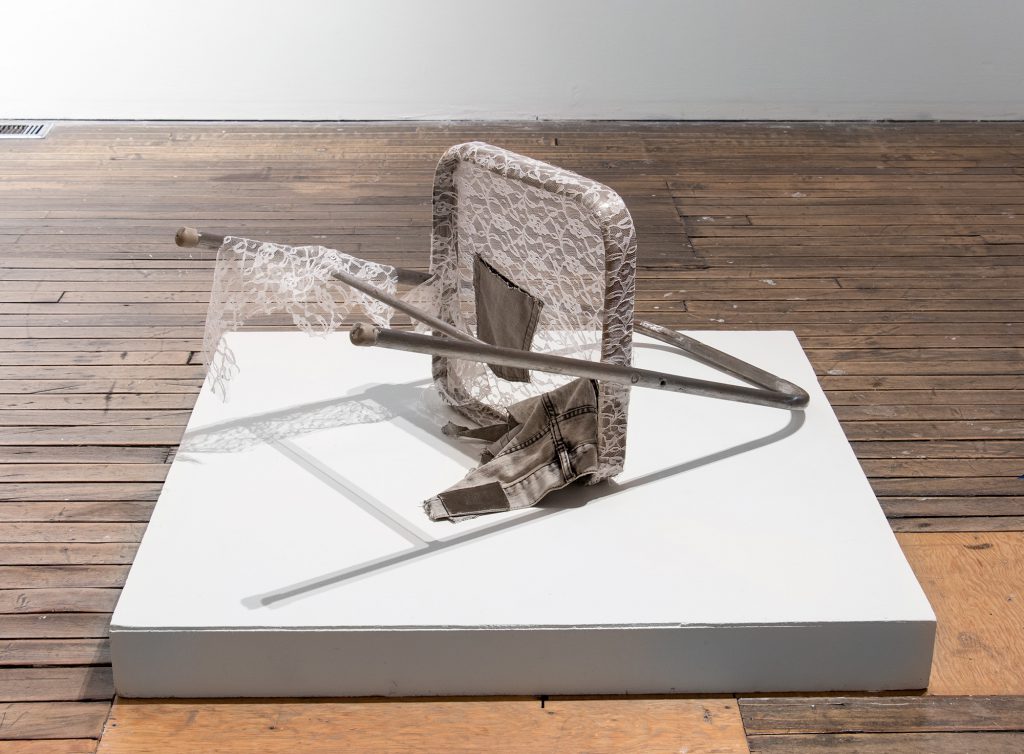 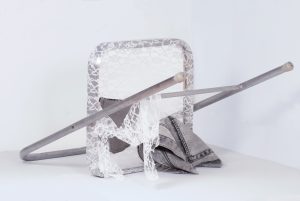 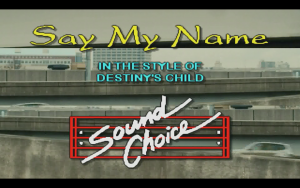 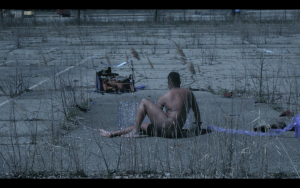 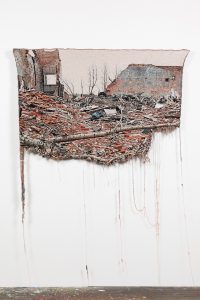 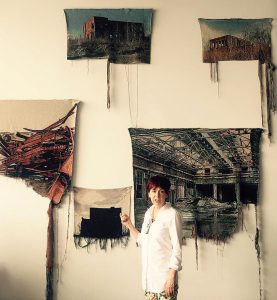 Lauren Davies in her studio 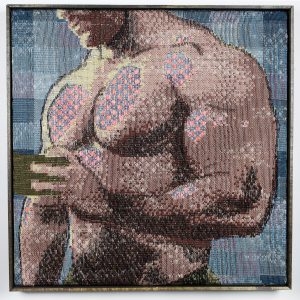 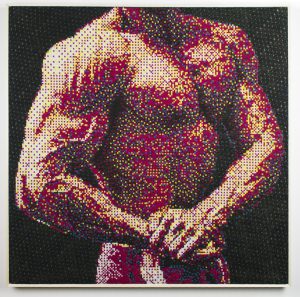 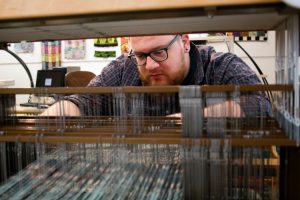 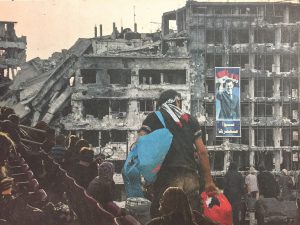 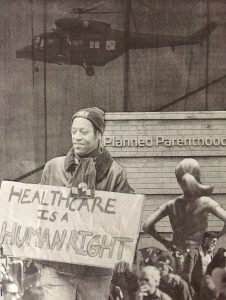 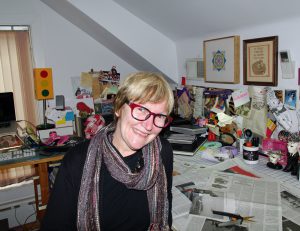 Penny in her studio. 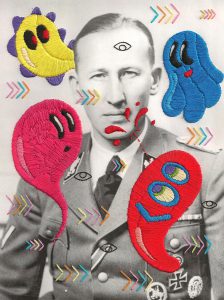 Kathryn Shinko, Heydrich Series , Series of 3, “The Heydrich Series: But We Thought You Wanted to Play with Us,” 2012, Hand embroidery on printed photograph, card stock, 10 x 8 in. each. 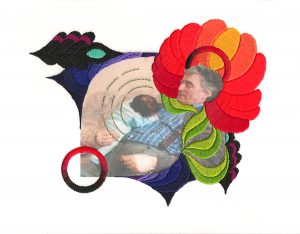 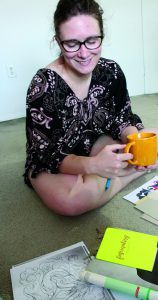 Campus-wide opening reception with The Nowness of Then: Lilian Tyrrell’s Disaster Blankets, the Artists Archives of the Western Reserve’s In the Details, and the Davis Stufio Gallery’s open house, Friday, September 15, 5:30 – 8 p.m.
The Artists’ Talk, 6:15 p.m. in the Euclid Avenue Gallery
Brinsley Tyrrell’s Talk, 7 p.m. in the Main Gallery

Objections and Connections, Fiber Artists Talk Back complements and confirms the relevancy of the exceptional artwork of The Nowness of Then: Lilian Tyrrell’s Disaster Blankets. These five fiber and multimedia artists are working with imagery and objects taken directly from the public realm, most from the internet. As Alfredo Jaar recently said of his own work, theirs is a “reaction to reality.” They are addressing issues of the environment, politics now and politics of the past that still impinge upon now, ethnic cleansing, and gay culture.

William Marcellus Armstrong has a multidisciplinary practice among video, sculpture, and installation as a way of exploring narrative and identity through material and form. His video work An Ambiguous Narrative of Overdramatic Reenactments uses transition shots of documentaries, newsreels, and film footage from Set It Off, along with Destiny’s Child’s The Writing’s on the Wall album as a soundtrack. Armstrong states the work “captures the movement of the invisible, and sets it to a soundtrack that demands visibility.” Marcellus (b. Baltimore, MD, studio practice in Detroit, MI) recently graduated with an M.F.A from Cranbrook Academy of Art after receiving a B.A in both Studio Art and Broadcast Journalism at Lincoln University, in Pennsylvania. Marcellus is working as an Adjunct Professor at Wayne State University, Detroit, MI. View Armstrong’s artist C.V.

Lauren Davies’ newest project, Industry Unraveled, is a reflection upon the disintegration of once publicly accessible commercial buildings and the subsequent polluting of our soil and water. She is photographing buildings of Cleveland and Youngstown, having the photographs woven into tapestries by Walmart, and subsequently unraveling large sections of these fabrics. Lauren Davies (Cleveland, OH), an established sculptor who works across media, served as a curator, gallery director, and public programs director in the Bay Area from 2000-2012. She was the Gallery Director at 2731 Prospect Contemporary Art in Cleveland from 2015-2017. Lauren is now engaged in a full time studio practice in Cleveland with support from the Joan Mitchell Foundation and the Ohio Arts Council. View Davies’ artist C.V.

Trey D. Gehring for his graduate thesis work, Musclebound, appropriated images that men share of themselves on the social media outlet, Instagram. As a musing upon male dominance, social isolation and anonymous yet personal public display, and body imagery, Trey presents these formidable male bodies as decorative objects. He creates his fiber art using a commercial Jacquard loom with hand inserted metallic covered threads and a knitting machine. Trey (Kent, OH) received his MFA from the Textile Department of Kent State University in May 2016. View Gehring’s artist C.V.

Penny Mateer has an art practice that includes print making, sculpture, and political action interventions. She has a long running series of political commentaries wherein she makes a daily collage with images from the New York Times that she posts on her Instagram page. Those collages that she feels are particular strong and politically relevant she has printed on fleece blankets at Walmart (“After all, we’re all being fleeced,” she wryly notes.)  The curator selected four of these collages from the last year to be made into blankets for this exhibition. Penny (Pittsburgh, PA) has exhibited her artwork widely in both fine arts and crafts setting. Currently she is a full-time studio artist in Pittsburgh. She graduated with a M.S.W. from the University of Pittsburgh in 1988 after receiving a B.A. from Hampshire College in Amherst, MA. View Mateer’s artist C.V.

Kathryn Shinko has developed a fiber practice that strongly protests, through visual and verbal irony, the degradation of women and the flagrant injustices of political power, especially in Eastern European, former Soviet countries. Her two series of needlepoint pieces in this exhibition present an ironic and damning perspective of two terrible men of the 20th century, by her judicious application of needlepoint to well known, internet available photographs of the men and her cynical accompanying descriptions. Reinhard Heydrich, considered by historians to be the most ruthless of the Nazis, is particularly notorious for his treatment of the Czech people and resistance fighters and for his direct coordination of the murder of at least 2 million people in the wake of the German armies’ advances. Radovan Karadzic, former leader of the Bosnian Serbs during the Yugoslavian conflict of the 1990s, was sentenced to 40 years’ imprisonment for genocide in 2016 by the International Criminal Tribunal of the Former Yugoslavia (ICTY), The Hague, The Netherlands.

Kathryn (Akron, OH) received her BFA in Graphic Design from the University of Akron in 2011 and her MFA in Textiles at Kent State University in 2015. Her work has been shown across the United States. Most recently, she was nominated for the 2017 American Craft Council Emerging Voices Award. Kathryn currently works as an adjunct instructor of design at the University of Akron and as a sales and displays associate at Don Drumm Studios & Gallery. View Shinko’s artist C.V.