The twelve artists participating in Crossroads: Still We Rise are each creating a work of art in dialogue with resident engagement in six primarily Black historically underserved East-side communities in Cleveland. Possessing strong visions of identity of what it means to be Black, Indigenous, Person of Color (BIPOC), these 12 leading artists have important ties to Cleveland, and can authentically translate the communities’ needs and wishes in their artwork. 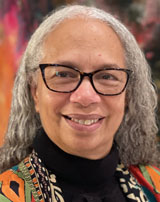 Robin Robinson is an award-winning artist, art educator, art therapist, and community activist. Although a native of Philadelphia, Pennsylvania, Robinson has a strong connection to Cleveland. As a child, she spent every Easter and summer vacation in the Glenville neighborhood with her grandparents and cousins. She fondly remembers looking forward to shopping on East 105th Street because of the entrepreneurial excitement that radiated from that area. Since her return to Cleveland in 2011, Robin has observed the devastation of many economically depressed East-Side neighborhoods. In 2015 Robin created the “Urban Renaissance with heART” program designed to harness the healing power of community-driven public art. As the co-director of Sankofa Fine Art Plus, Robin is dedicated to bringing fine art outside of the traditional, restrictive art venue into the urban community in the form of co-creative, collaborative, socially relevant public art projects. In her words, "As a Black artist, it is my responsibility to translate the otherwise ignored voices of under-represented communities into artworks that are engaging aesthetically while being intrinsically thought-provoking." 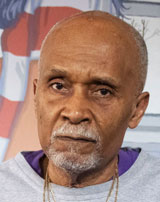 Lawrence Baker is a painter born and raised in Jacksonville, Florida. He received his MFA from Kent State University in Kent, Ohio, and has competed nationally in painting shows since 1974, in addition to receiving several awards in recent years in recognition of his work with the community. His art is on permanent display in several collections, including the Springfield Museum of Art in Springfield, Ohio. Baker has now retired from working with the Cleveland Municipal School District as a Visual Arts Instructor and spends his days practicing his craft.

Baker has chosen Glenville High School as his site. 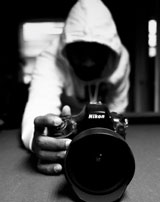 All it takes is for someone to drive through some of the roughest parts of Cleveland to witness the beauty and impact of Donald Black, Jr.’s photography. Black’s work is on the ground alongside the people who are from the same environment that he represents. And when you hear his story, with all of its rugged and rough edges, you’ll understand why it’s so impressive that he was able to maintain the focus needed to avoid falling into the traps that his environment steadily situated and promoted. Here, there are no stories of happy endings, white picket fences, silver spoons or long lists of impressive schools, exhibitions and awards. Instituting himself and tabulating all of his accomplishments isn’t as impressive as knowing how serious and meaningful art is to the person who is doing it to stay alive.

Black’s site is Scofield Mansion in the Kinsman neighborhood. 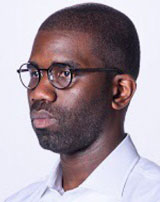 Marcus Brathwaite is an artist born in Brooklyn and raised in Cleveland, Ohio. He received his BFA from the Cleveland Institute of Art and he is currently working as a Furniture Designer in Greensboro North Carolina. Before moving to North Carolina, Brathwaite was a Fabrication Manager at think[box], a world-class center for innovation and entrepreneurship located on the Case Western Reserve University campus. As a Fabrication Manager, he made it his mission to make fabrication tools and knowledge open and accessible to the public.

Brathwaite has selected the BoxSpot in Cleveland’s Kinsman neighborhood as his site. 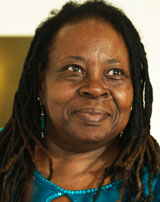 Gwendolyn Garth is a multimedia artist, community activist, and native Clevelander. She is a Creative Art Therapy Specialist and Social Practice Artist who has made a name for herself as an avid champion for marginalized artists. In 2014, she founded the nonprofit Kings & Queens of Art with the mission to transform communities through the celebration of the arts and African-American history and culture.

Garth has chosen the Goodwill building in Cleveland’s Central neighborhood as her site. 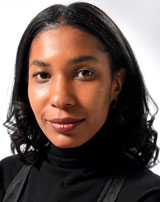 Amanda D. King (b.1989, Pittsburgh, PA) is a Cleveland based artist and activist who envisions possibilities within the arts, culture, and design to compel social justice. She is the creative director of Shooting Without Bullets, a non-profit creative agency and production company composed of Black and Brown youth and justice-minded artists that uses cutting-edge cultural production to amplify bold messages of justice and equity while promoting social movement in Cleveland and beyond. King’s work has been exhibited and presented by cultural institutions and initiatives such as SPACES gallery, The Artists Archives of the Western Reserve, Karamu House, LAND studio and For Freedoms as well as featured in media including the Guardian, Plain Dealer, Cleveland Magazine, Hyperallergic, Artnet News and Dazed Digital. She currently writes “What’s Next”, a column on what’s next in arts, culture, media, and politics for CAN Journal. King holds a Bachelor of Arts in Art History from Bryn Mawr College and a Juris Doctor from Case Western Reserve University where she received the Martin Luther King Jr., Diane Ethics, and Dean’s Community Service Awards.

The site King has chosen is Corey United Methodist Church in the Glenville neighborhood. 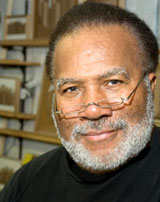 Hilton P. Murray is a corrugated cardboard and paper-on-paper artist. He was born in Luverne, Alabama and raised in Elyria, Ohio. He received his BFA in Advertising Art and his MFA in Graphic Design for television from Kent State University. After 17 years as creative director at Cleveland's Fox station (WJW TV8), he formed his advertising and marketing firm, HPM Consultants Inc., in 1997. Since then, HPM Consultants has received a number of local, national, and international awards including the Aster Awards, MarCom Award, Telly Award, Summit Award, and the Communicator Award.

Murray’s site is a now-empty lot a mere steps away from what used to be Slavic Village’s bustling downtown. 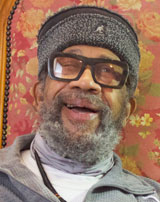 Ed Parker is an artist, educator, and entrepreneur born in Pittsburgh, Pennsylvania and raised in Toledo, Ohio. He earned his BA from Central State University and his MFA from Kent State University. Throughout his career, Ed has worked in classrooms, studios, galleries, and museums in America, Africa, and Europe. He began teaching art in Cleveland Public Schools and moved on to teach at the Cuyahoga Community College for nearly twenty years before retiring in 1999 and founding the Snickerfritz Cultural Workshop for the Arts in 1984. In 2017, he expanded the Snickerfritz to include the Edward E. Parker Creative Arts Complex. The Complex includes gallery and classroom spaces and a number of small businesses. Parker's artistic achievements include numerous one-man and group shows in Ohio, and commissions from Cleveland's Cuyahoga Community College and Florida Memorial College.

Parker has selected the Edward E. Parker Creative Arts Complex in East Cleveland as his site. 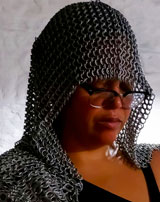 Shani Richards is a metalsmith born and raised in Akron, Ohio. She received her BFA in Metalsmithing from the University of Akron and her MFA from SUNY New Paltz, where she was awarded the Sojourner Truth Fellowship. She has held internships as a jeweler’s assistant at Noha’s Jewelry and Stony Jewelry in New York and her work has been shown at the National Ornamental Memphis Metal Museum. She has also been featured as a speaker for The Association of African American Museums Conference. 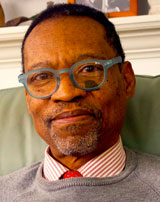 Vince Robinson is an arts advocate, pianist, poet, and photographer who was born in Utah but grew up all over the world living in 5 states and 2 foreign countries as his father was a 22 year Air Force Veteran. He now calls Cleveland home and has lived here for the past 40 years. Robinson received his BA in Telecommunications from Kent State University. Robinson teaches writing for Literary Cleveland in addition to leading poetry workshops for various non-profit organizations. In addition to this work, he also currently hosts a television show on Community Focus Television in Macedonia, Ohio and he hosts radio shows on AM1490 WERE (360 Info Network) and 95.9 FM-WOVU (Open Door with Vince Robinson). He is also currently working with the Cleveland City Council as an advocate for arts education in addition to running his photography and cultural entertainment venue, Larchmere Arts.

Robinson has selected the intersection of 99th and Buckeye in Cleveland’s Buckeye neighborhood as his site. 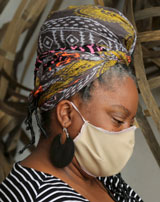 Charmaine Spencer is a Cleveland-based sculptor born and raised in Ann Arbor, Michigan. She received her BFA in Sculpture from the Cleveland Institute of Art. She has received a number of awards throughout her career most recently including the 2020 Ohio Arts Council ADAP Grant and the 2018 CAN Triennial Prize. Her work has been featured at Still-point Gallery, Artist Archives of the Western Reserve, Cleveland State University Gallery, Spaces, the Maltz Museum, and she has been commissioned by The Cleveland Museum of Natural History, Cleveland Clinic, and the Hilton Hotel. She is currently the owner and curator of her studio gallery space, Studio 302 at 78th Street Studios.

Spencer’s site is the entrance to Woodland Cemetery in Cleveland’s Central neighborhood. 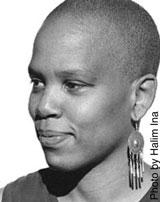 Gina Washington is a photographer born and raised in East Cleveland, Ohio. She received her Master’s in Fine Arts in Photography from Ohio University in Athens, Ohio, and has won numerous awards for her portraiture and multi-medium art. She works with The Visit Arts Collaborative and engages with the community by spreading art to all. By working and connecting with artists of all walks of life, Gina wishes to make art accessible to everyone.

Washington has selected the Forest Hill Park Footbridge in East Cleveland as her site. 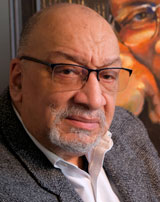 Gary Williams is a painter and muralist born and raised in Cleveland Ohio. He graduated from Cleveland State University with a degree in Psychology and later began classes at the Cooper School of Art in the Commercial Art degree program. As a man with varied interests, he later pursued a degree in Law from Cleveland State University’s Cleveland-Marshall College of Law and had a long and successful career as a lawyer and legal educator before becoming a full-time fine artist. In 2013, he studied under Kent Twitchell, a nationally renowned muralist from California and since then, he and his partner, Robin Robinson, have installed numerous monumental sized murals throughout Northeast Ohio. Williams has won numerous awards for his artwork including Cuyahoga Arts and Culture’s Creative Workforce Fellowship in 2012.

Williams’ site is the Rid-All Green Partnership in the Kinsman neighborhood.