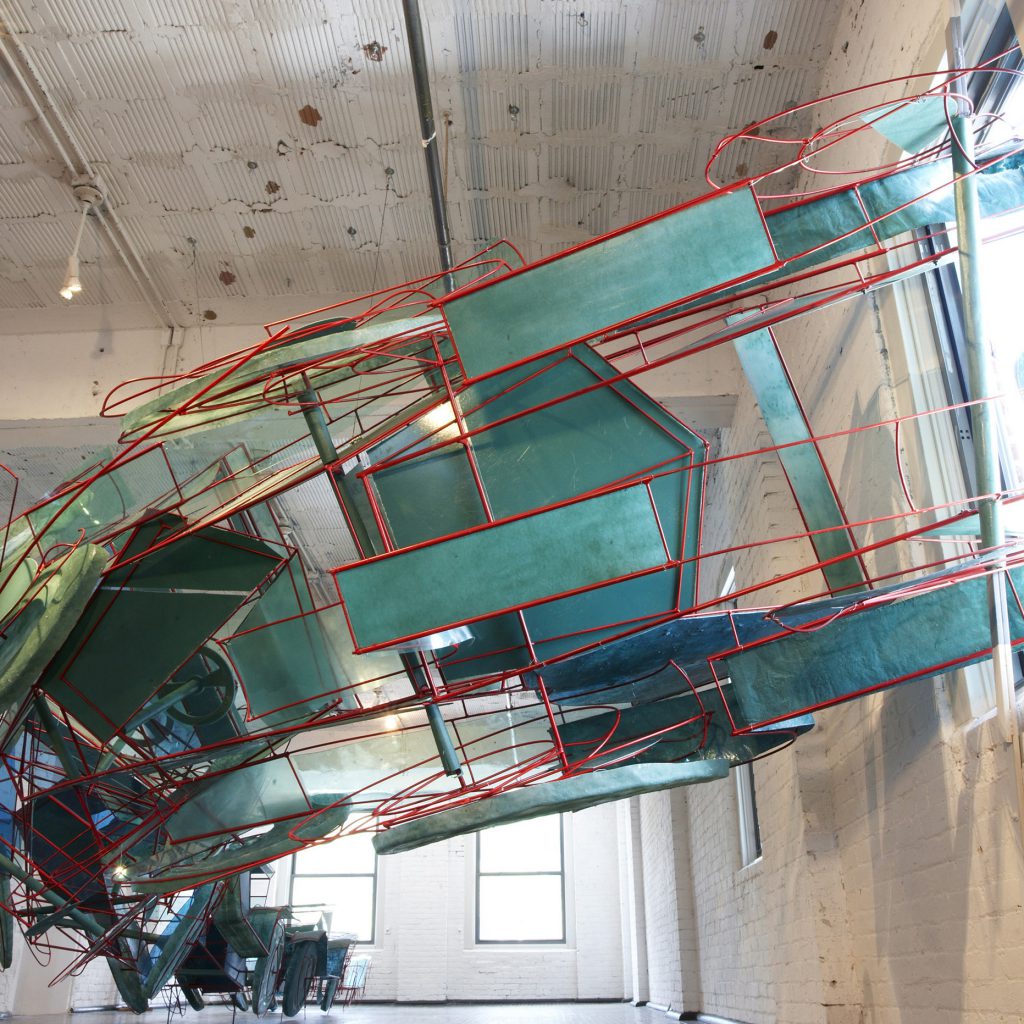 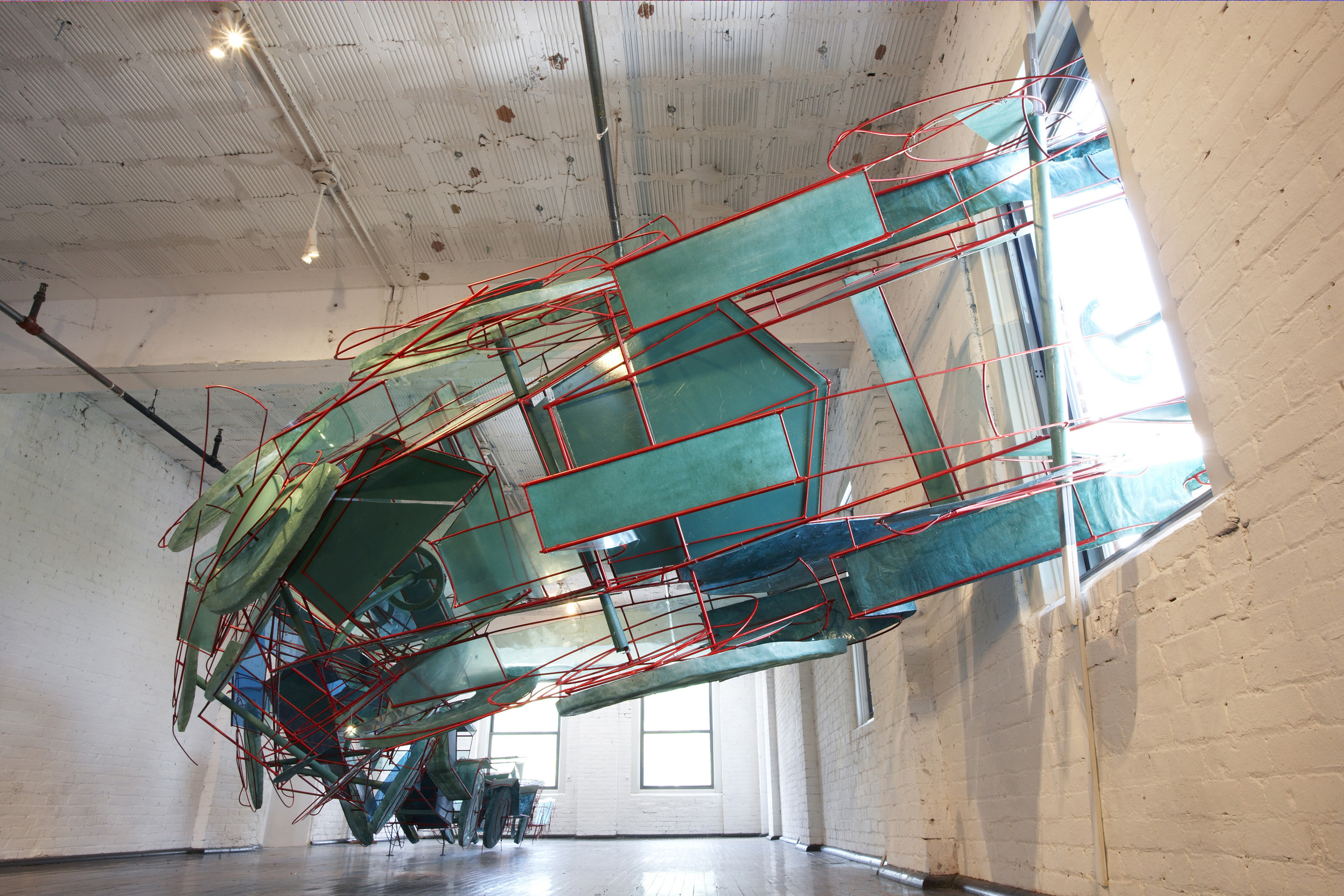 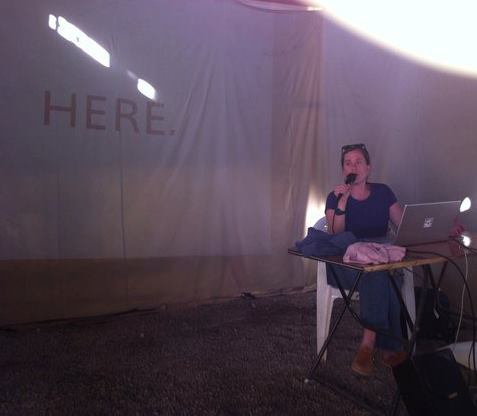 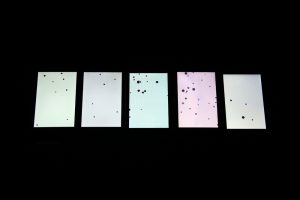 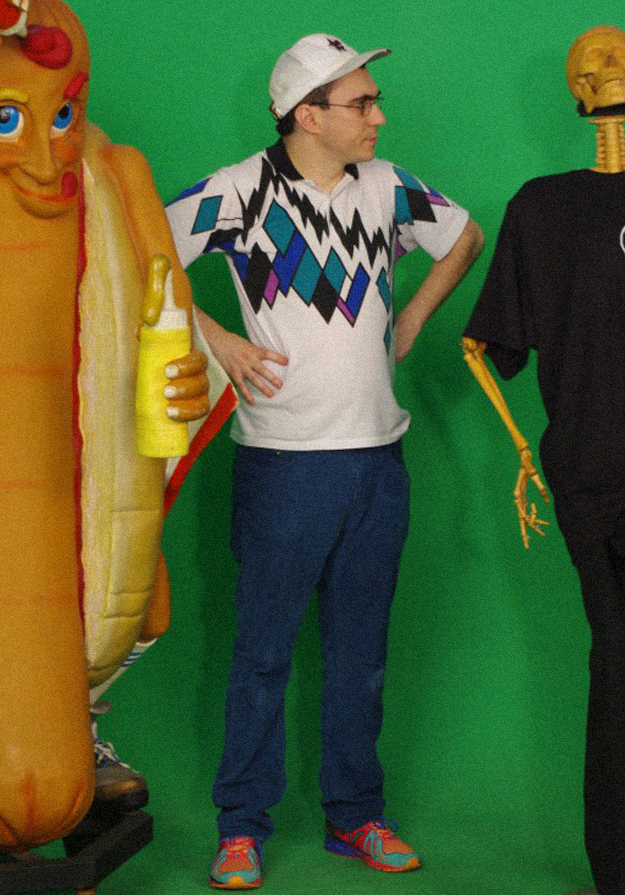 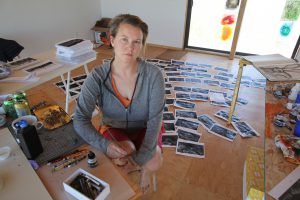 Rian Brown-Orso in her studio 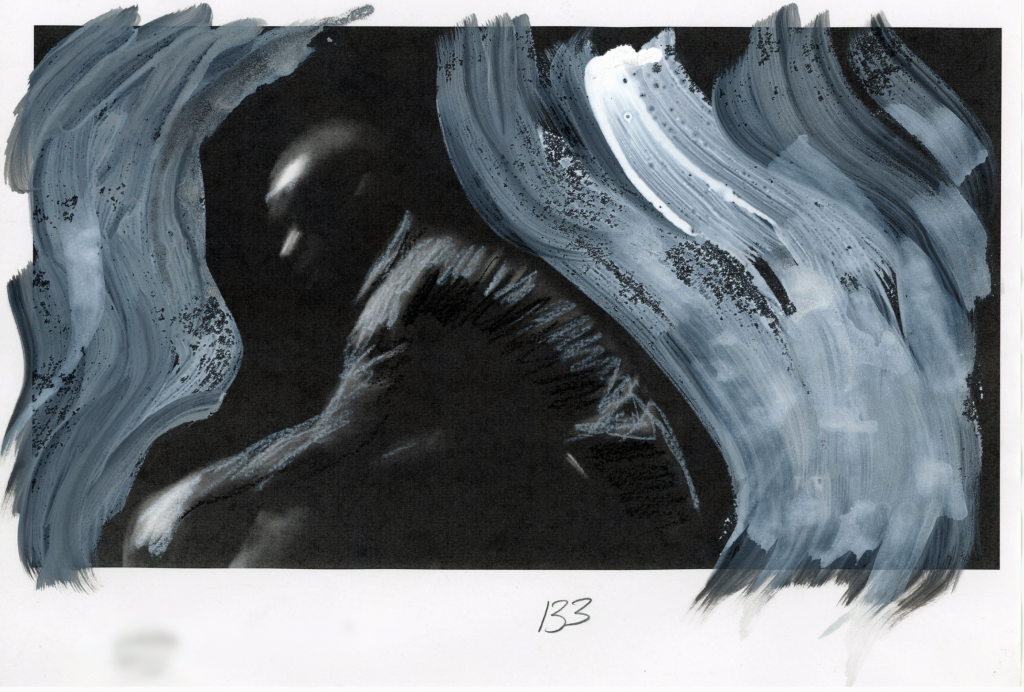 A panel for the Cleveland Sculptors Network/Getting There from Here
Friday, April 7, 2017 @ 6:30-8:30 pm
Panel @ 7 pm
at 2731 Prospect Contemporary Art with networking reception before and after to meet each other and the artists
2731 Prospect Avenue, Cleveland, OH
Free and open to all

His films/videos have been shown at MoMA and Lincoln Center (New York), the ICA (Boston), British Library and ICA (London), and on Italian television among other places.  Articles on his works have appeared in The New York Times, Art in America, ModernPainters, Art on Paper, Frieze, The New Yorker, Flash Art, and others.

A Fulbright Fellow, he has received grants and awards from the Guggenheim Foundation, Barnett and Annalee Newman Foundation, New York State Council on the Arts, Creative Capital Foundation, and New York Foundation for the Arts. He has given lectures on his work at Harvard, Yale, Brown University, Columbia, M.I.T., Skowhegan, and many other international institutions and museums. He is the Director of the Mount Royal School of Art, a multi-disciplinary graduate program at the Maryland Institute College of Art (MICA) in Baltimore.

Luca Buvoli is a 2017 Smithsonian Artist Research Fellow at the National Air and Space Museum in Washington DC. His artworks are in the collections of MoMA, New York, Guggenheim Museum, and many other institutions.

Julia Christensen: video clip from Burnouts
Julia is a multidisciplinary artist whose work explores systems of technology, consumerism, landscape, and history. Her work has exhibited internationally, at venues such as Eyebeam (NYC, NY), 21C Museum (Louisville, KY), Walker Art Center (Minneapolis, MN), Carnegie Museum of Fine Arts (Pittsburgh, PA), and internationally in Finland, Croatia, Greece, and beyond. Christensen is a 2013 Creative Capital grantee in Emerging Fields. Her work has additionally been supported by the New York State Council on the Arts, Turbulence, and residencies at the Wexner Center for the Arts Film/Video Studio, Experimental Television Center, and The Center for Land Use Interpretation.

Julia is the author of Big Box Reuse, published by the MIT Press in 2008. Her writing has been published in magazines such as Cabinet, Orion, Print, and Slate. Her work has been written about in The New York Times, Art in America, Bomb Magazine, The Washington Post, Bookforum, The New York Review of Books, and Dwell Magazine, among many other publications. Christensen’s work has been included several books, including Younger Than Jesus Artist Directory (New Museum), It’s the Political Economy, Stupid (by Gregory Sholette and Oliver Ressler, Pluto Press), and Worlds Away: New Suburban Landscapes (Walker Art Center), as well as in a number of books written by architects, designers, and curators. She has appeared as a guest on numerous radio shows including “All Things Considered,” “On Point with Tom Ashcroft,” and “Q with Jian Ghomeshi.”

Ms. Christensen is also an active musician in the worlds of new and experimental music. She is the founder and director of WAM!: Women and Art Music Ensemble at the Oberlin Conservatory of Music. WAM is a group of women performers playing experimental music by living women composers. The group has commissioned works by and performed with composers such as Miya Masaoka, Pauline Oliveros, and Bevin Kelley.

Ms. Christensen is Assistant Professor of Integrated Media in the Studio Art Department at Oberlin College, where she has additionally served on the faculties of Environmental Studies and TIMARA (Technology in Music and Related Arts). From 2007-2011 she held the position of Henry Luce Visiting Assistant Professor of the Emerging Arts, a joint appointment between Oberlin College and Conservatory. Before coming to Oberlin, she taught at Stanford University, Pratt Institute, California College of the Arts, and other colleges. She has been an invited speaker and critic at dozens of colleges and universities, including Georgia Tech, Yale University, Virginia Commonwealth University, and the San Francisco Art Institute.

Jacob Ciocci: video clip from Extreme Animals  is Visiting Professor of Integrated Media at Oberlin College. He is an artist living and working in Brooklyn, NY, and Oberlin, OH. In his videos,  multimedia installations, websites, and performances, the cultural symbols of our time, both the popular and the obscure, both the contemporary and the recently forgotten confront one another and the viewer on a visceral, emotional, and experiential level. He has performed and exhibited at a variety of venues including the New Museum and MOMA in New York, Tate Britain. Recent activity includes a comprehensive screening of his video work at Anthology Film Archives and an exhibit at Cooper Cole Gallery in Toronto.

SHOW MORE
Ciocci, his performance group Extreme Animals, and his former collective Paper Rad have received critical acclaim in a range of publications, including: the New York Times; ArtReview; Artforum; Art in America and Vice. DVD publications include 2 Blessed 2 B Stressed and Music Is a Question With No Answer, both produced by Audio Dregs Recordings, and Trash Talking, produced by Load Records, Internet Art (Thames and Hudson, 2004), and two artist’s books designed by Paper Rad: BJ and da Dogz and Cartoon Workshop/Pig-Tales (Picture Box Inc).

Rian Brown-Orso: video clip of hand-painted DIG TAC animation for The Foreigner’s Home, a feature-length documentary film on the intellectual and artistic vision of Nobel Laureate Toni Morrison.
Rian is Associate Professor Cinema Studies/New Media, Co-Director, Apollo Outreach Initiative, ad Co-Director, Apollo Center for Media Education and Production. Born in Roanoke, Virginia, Rian Brown is a filmmaker and video artist. She grew up in a family of artists and as a child lived in many different parts of the U.S., studied art at the Massachusetts College of Art and received her Masters of Fine Arts in film from the University of California, San Diego. Brown’s work spans a variety of film genres – including experimental, personal narrative, documentary and video installation – and explores notions of motherhood, identity, landscape, memory, and nostalgia in both narrative structure and visual style. Reflecting Brown’s background in painting, her films also deploy rich, visually dynamic imagery, hand-painted animation, and experimental techniques.

SHOW MORE
Presence of Water, a short 16 mm film Brown shot in Northern Italy, is a visual diary and memory of the last few months of pregnancy that has shown widely in festivals, including the Independent Film Channel, the New York Shorts Festival, the Ann Arbor Film Festival, the Nashville International Film Festival, and the Women in the Director’s Chair. Recently she completed Into the Scrum, a short documentary that takes an intimate look at the complex and physical world of women’s rugby. In 2009 she traveled to Antarctica with filmmaker and frequent collaborator Geoff Pingree to film BLUE DESERT ~ Towards Antarctica, a multi-channel video installation that premiered at Boston’s Laconia Gallery and has since shown at Oberlin’s Baron Gallery, Newseum in D.C. and Cleveland’s Ingenuity Festival. Her work has shown around the world at film festivals and museums including the Wexner Center, L.A. Hammer Museum of Art, the Harvard Film Archive, the Museum of Contemporary Art in Cleveland, and the Milano-Athenia in Athens, Greece. Brown was an artist in resident at the Headlands Center of the Arts, and in 2011 she was awarded an Ohio Arts Council Individual Excellence Award. With Pingree she also founded and directs the Apollo Outreach Initiative, a media education and community outreach program housed in Oberlin’s historic Apollo Theater.  In 2015, Rian Brown and her colleague Geoff Pingree were awarded grants from the Andrew W. Mellon Foundation and the Ford Foundation’s JustFilms initiative for the production of The Foreigner’s Home, a feature-length documentary film on the intellectual and artistic vision of Nobel Laureate Toni Morrison. The film will be released in 2017, explores the ideas and vision Toni Morrison articulated – and the public conversation she began – in the exhibition she guest-curated at the Louvre in 2006. Most recently she was awarded a 2017 individual excellence award from the Ohio Arts Council.

Cleveland Sculptors Network
The Sculpture Center and the commercial Cleveland gallery 2731 Prospect formed the Cleveland Sculptors Network/Getting There from Here in 2016, as a venture to increase the reach and connectivity of sculptors of Northeast Ohio and our greater region. We are hosting a series of evening panel discussions, followed by a social gathering, and a Master Review & Collective Discussion the next day. The moderated panel discussions focus on selected contemporary issues in sculpture and on issues facing artists living and working outside major metropolitan cities. The panelists are an invited mid-career sculptor from outside our region and one or two regional sculptors who might be exhibiting at 2731 Prospect or at The Sculpture Center as part of its annual Window to Sculpture Emerging Artist series (W2S). These panels are open to everyone interested – the public, sculptors, artists of all media, academics, and students.

On the following morning, the visiting sculptor holds a Master Review & Collective Discussion with an intimate group of 5 selected sculptors of NE Ohio and our larger region. This is a group, critical feedback discussions of the work presented by the selected artists intended to foster ongoing ties of the sculptors with the visiting artist and among the regional sculptors for future interactions.

Cleveland Sculptors Network is generously funded in part by the Ohio Arts Council and the Callahan Foundation.