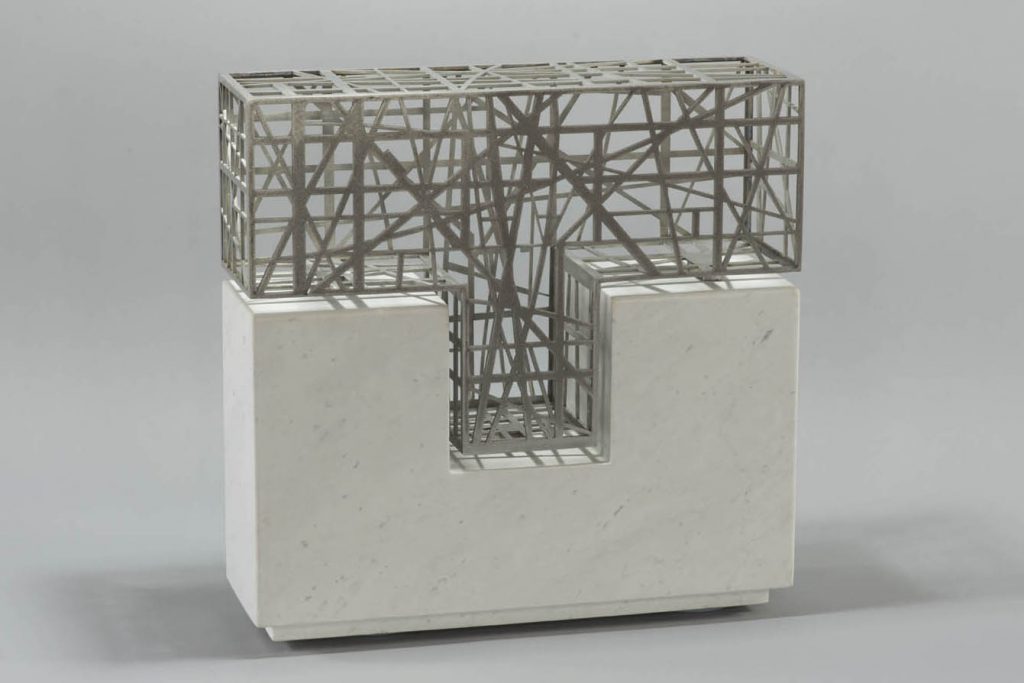 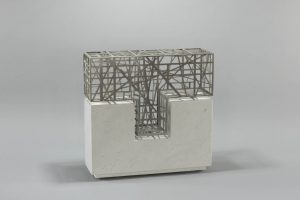 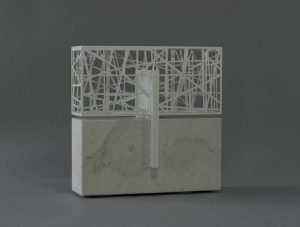 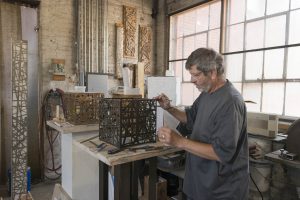 Andrew Chakalis has been making art since the late 1950s, engaging in his ongoing “Sculptural Voyage.” I imagine this voyage extending from the Greek islands of his heritage (beautiful Evia Island in particular) where the ruins of antiquity, always stone and bronze, still dominate the culture, to Cleveland (his birthplace in 1945) with its renowned antiquities collection at the Cleveland Museum of Art and its own stones and metals, to Italy (in 1966) when he studied with a master stone carver and his son in Carrara, at the very quarries where Michelangelo purchased his marble during the late Renaissance. This journey also passes through the truly ancient history of the formation of the beautiful stone – granite, a particularly hard sandstone, and Carrara marble – that Andrew uses for all his sculptures and the relatively recent creation of the Cleveland street grids that are the patterns for his metal components.

Andrew’s aesthetic odyssey also has a direct and felicitous connection to our esteemed founder David E. Davis. In 1970, while driving down Mayfield Road, Andrew spotted a building and immediately thought that it had to be a sculptor’s studio. He stopped in, found David at work, and a lifelong friendship began. This first meeting was just after David had resigned from American Greetings (where he had risen to the position of Vice President) in order to pursue his art making full time. It was before David had begun his first sketches for the Harmonic Grid series, which would occupy much of his sculptural career, and years before David’s final studio at East 123rd Street. Along the way, with Isamu Naguchi, they showed together at the Cleveland Museum of Art’s 1977 May Show. The two sculptors continued to meet weekly until David’s death in 2002. The bonds that formed between Andrew and Davis over those many years were both personally and aesthetically rooted, for they share many commonalities as artists. If you missed the opening of this exhibition, do return for another Sculpture Center opening when you can visit the Davis Sculpture Gallery and compare and contrast the two men’s work.

Andrew at the beginning of his career decided upon a firm stylistic trajectory of geometric sculpture. He is a meticulous, perhaps obsessive, craftsman and has an innate ability to conceive of his sculptures at different sizes and scales. Deeply sensitive to the characteristics of his materials, he creates a complementary marrying of the carefully selected stones and metals. The patterns and color multiplicities of the stones and the polished finishes that he achieves are striking. The variety of metals, the means by which each is fashioned for a particular sculpture, and the carefully thought out finishes, sometimes only a polish, sometimes a patination, sometimes a paint, are always painstakingly determined.

The Sculpture Center is so very pleased to be showing this new body of 13 sculptures that Andrew has created in the last year. We thank him for this opportunity to showcase his work in what was the original Sculpture Center gallery. Andrew has generously produced the accompanying catalog that is available to all who attend the opening. Renaissance scholar Edward Olszewski, retired Chair of Case Western Reserve University’s Department of Art History and Art, a former Sculpture Center board member, and a friend of David Davis, has generously contributed a thoughtful essay on Andrew’s work.

Artist’s Statement
This exhibition of recent sculptures continues a theme I began to explore a number of years ago, The City Block and Voyage series which were inspired by low-level, urban, aerial flights.  Street grids and natural patterns stimulated translation of topographic notations into two- and three-dimensional forms.

Some sculptures in this exhibition have exact geographic mapping locations whereas others are entirely abstract in their formation.

I incorporate into my works metal and stone as independent or combined materials. Bronze, steel, and stainless steel serve as mapping structures, often with marble, polychrome sandstone, or granite as foils within the sculptural forms. Humanity and nature coalesce in my selection of materials – that is, stone as the natural material of earth, and metal, a manufactured material. These 13 sculptures highlight my current sculptural journey.